In 1913 the congregation purchased a duplex at 10 & 12 St. Andrew St. in Kensington Market, a short walk west of the Ward, following the growing trend of the Jewish community’s movement at the time. The congregation itself, however, did not move to its new location until around 1916; the same year that Rabbi Meyer Levy, formerly of the Chestnut Street Synagogue and originally from Galicia, moved his residence into the premises and served as Rav of Anshei Minsk.

It appears that the present building’s construction commenced around 1922, although it was not officially completed until 1930. At about the same time as construction started, Rabbi Levy moved on to the Men of England Synagogue and Anshei Minsk was without its own Rav until the late 1980’s when Rabbi Shmuel Spero arrived from Cleveland to face a greatly changed Kensington Market. At its peak in the area, the Jewish community had roughly 30 places of worship in Kensington Market ranging from modest shtiblach to buildings like Anshei Minsk. 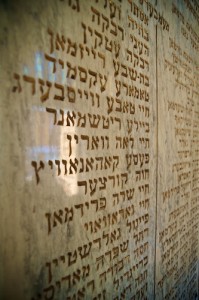 By the late 1980’s, Anshei Minsk was downtown Toronto’s only congregation with daily prayer services and continues to be so today. The area’s Jewish community has also changed dramatically. It is now comprised of older Jews who chose not to follow the larger community’s move north on Bathurst, young university students, young professionals who prefer the vibrancy of the city to the quiet of the suburbs, and those who have moved back down into the growing number of condominium developments on the lakefront. Anshei Minsk also serves those Jews who live north but work downtown, those visiting the sick in any one of the numerous hospitals within easy walking distance, tourists and business travelers staying in one of the downtown hotels, and the hundreds of Jews who grew up in the area whose fond memories of childhood are recaptured whenever they come to daven or enjoy our famous Purim or Chanuka parties.

While Anshei Minsk is unequivocally orthodox and true to Torah, Rabbi Spero has created an atmosphere that is welcoming to all Jews. One can easily expect to find anyone from a Satmar chasid visiting someone in the hospital, to an elderly man saying Kaddish who hasn’t worn tefillin for 30 years; from a medical student who has never been in an orthodox synagogue to a Jewish family from Gibraltar on vacation.